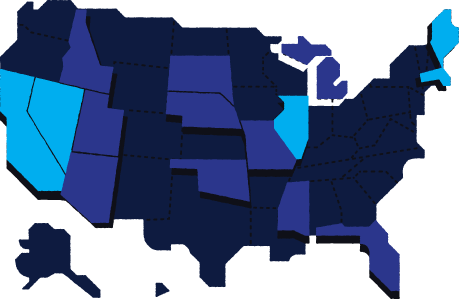 Legalization of cannabis shows no sign of slowing in 2018 despite discouraging developments in Washington, D.C. Cannabis is still considered a Schedule 1 substance, an illegal drug that Attorney General Jeff Sessions is notoriously opposed to legalizing. He’s asked Congress for permission to prosecute suppliers of medical cannabis in legalized states and opposes an amendment to the federal spending bill that prevents the Justice Department from using its budget to prosecute such businesses—an existing protection since 2014. Check here regularly for legalization updates. Here’s a rundown by state.

A four-year pilot program allowing public cannabis cafes in Denver looks tenuous. Critics say that overly strict regulations may cause the initiative to fail. Sale of cannabis and alcohol are not allowed (BYO only) and cafes must be at least 1,000 feet from schools, childcare centers, city recreational facilities and rehabilitation centers; dispensaries are prohibited from allowing consumption on the premises. Applying for a license costs $1,000 and the license is an additional $1,000 a year.

Allowed in Alaska, Colorado, Oregon and Washington. None have opened. The Nevada Legislative Counsel Bureau issued an opinion stating that no law prohibits local governments from allowing cannabis consumption in businesses, suggesting that more formal legalization could soon follow.

California, Maine and Massachusetts regulations will allow cannabis consumption in some dispensaries. Alaska has proposed similar regulations but nothing has been approved.

Vermont made history when the legislature approved recreational use, taking it out of the hands of voters. But approval was vetoed by the governor in September, who ordered a commission to study cannabis use and regulation. Pennsylvania and Ohio lawmakers exercised their muscle last year and approved medicinal use but not recreational.

Cannabis in your cup

Cafes in New York City are serving coffee and cocoa with CBD, the nonpsychoactive property in cannabis. CBD-infused coffee is available online (some states have explicitly approved CBD oil, but it’s a legal gray area in others). Coffee, tea and hot chocolate with THC, the ingredient that produces the high from cannabis, can be found at dispensaries in states where cannabis is legal.

State of the States

Retail licenses allowing recreational weed sales are expected to kick in by Jan. 1. However, proposed rules prohibit cannabis- infused alcohol or products that combine caffeine or nicotine with cannabis. Refrigerated dairy, seafood, meat and perishable bakery products are also likely to be banned. Cannabis delivery by drones will be strictly prohibited.

The state banned THC-infused edibles for recreational use, including lollipops, ice cream and products, that resemble cartoon characters and packaging with images of toys, action figures or balloons to ensure that edibles are less appealing to children. Recreational sales began July 1; the first four days of sales generated $3 million in sales revenue and $500,000 in tax revenue. Some $30 million in sales are projected by the end of the year.

Two separate bills are pending: allowing residents to carry up to 1 ounce of weed and a $50 per ounce excise tax on growers.

Medicinal users can purchase cannabis and anyone can grow, own and consume weed in restricted amounts but it’s still illegal to buy or sell it. The regulatory system is scheduled to be established by July 1, seven months later than the original date that retailers had been scheduled to open.

The state blew the deadline to develop regulations for selling recreational cannabis and then put a moratorium on sales until February. Approval for recreational use is expected by mid 2018.

VOTERS FACE REFERENDUMS FOR MEDICINAL OR RECREATIONAL USE OR BOTH.