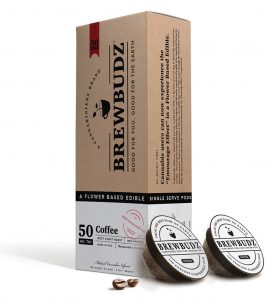 While coffee and cannabis are no strangers—brands such as Catapult and Legal commercialized the elixir in 2014— Brewbudz offers the first compostable, flower-based product. The eco-friendly pods fit into Keurig dispensers and other similar devices.

The pods kick in with more chutzpah than most edibles because it’s a hot beverage, Paul says. “A bit is absorbed through the mucous membrane in the mouth, which allows for a faster onset.”

Brewbudz roasts responsibly sourced whole Arabica beans for its West Coast Dark blend, giving imbibers some ethical contentment and a full-bodied cup of joe. French vanilla and hazelnut flavors will soon join the West Coast line in addition to black and chamomile teas and hot cocoa, the latter described as a dessert beverage.

“Someone (who) needs to get their day started can have a cup of coffee with 10 milligrams of sativa,” Paul says. “It doesn’t give them that high feeling of a heavy dose. It picks them up and helps them focus.”

Pods range from 10 to 50 mg of THC, with higher doses aimed at medicinal users and lower doses geared toward recreational use. Brewbudz retails for about $7 a pod, depending on the dispensary, and is sold in packs of three.

Cannabiniers hopes to introduce the compostable pot pods beyond California to 18 states over the next 18 months.