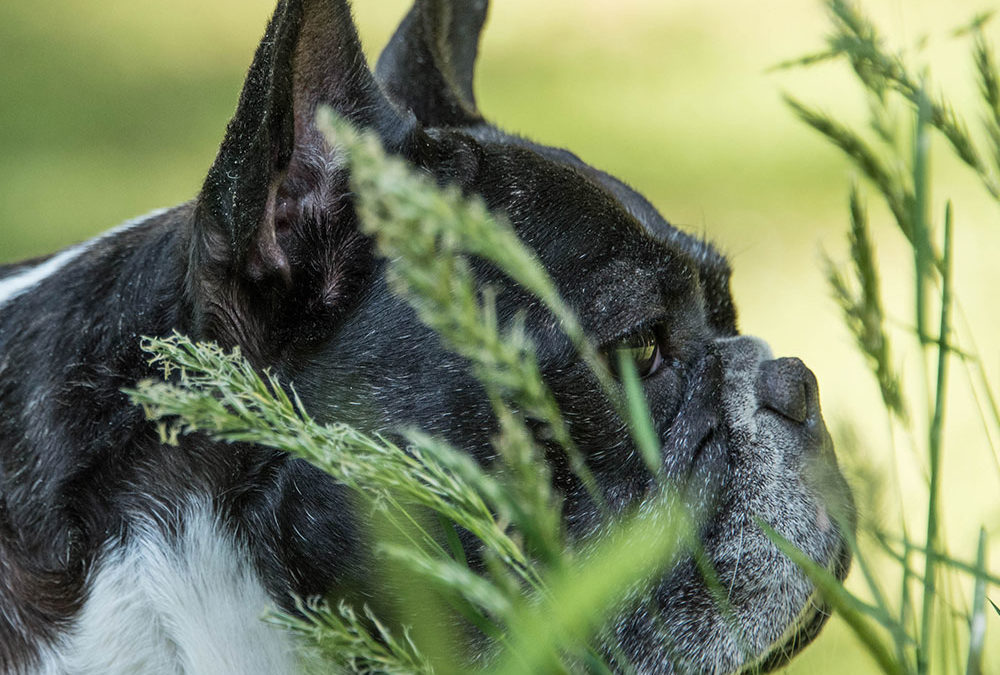 Spicer was in bad shape when Danielle Frenchy adopted him 10 years ago. The Chihuahua was blind from an injury and had severe stomach problems. One night, he was vomiting when Frenchy took him to bed with her. “I woke up to find him unresponsive in a pool of blood,” she says. “He was bleeding out through his rectum.” An emergency vet pulled him through, but subsequent doctors could offer only a diagnosis of inflammatory bowel disease and treatment for life with corticosteroids.

Corticosteroids are a last resort for dogs with inflammatory bowel disease because they decrease inflammation in the intestinal walls. But they come with a price: Short-term use causes increased thirst, hunger, urination and panting. Long-term use leads to increased risk of infection, ulceration of the digestive tract and personality and liver changes.

Years of corticosteroid use took its toll on Spicer, especially on his liver. Desperate to find a safer treatment, Frenchy tried CBD oil. She weaned Spicer off the prednisone—something she had tried to do many times over the years with no luck.

“After two and a half months of being on the CBD oil only, we have had no GI issues at all,” she says. His liver values are perfect. He still has other issues—heart problems and some tumors—but Frenchy is hopeful CBD may help Spicer conquer those as well.

Inflammatory bowel disease (IBD) is one of the most common chronic gastrointestinal issues for dogs. It’s a catch-all term for diseases that cause inflammation in the GI tract and lead to vomiting, diarrhea and abdominal pain. The gut is a unique part of the body when it comes to the immune system because it allows foreign antigens in food to pass through unchallenged. The body’s own cannabinoids exert an immunosuppressive influence in the gut so that foods don’t cause inflammation.

Treatment of IBD with CBD is still relatively uncommon but more veterinarians are starting to use CBD because of its anti-inflammatory properties. And it’s not just with dogs.

says that she has had positive results using CBD with cats suffering from inflammatory bowel disease and chronic pancreatitis.

For the past eight years, Kramer, who is also the medical director of VCA Canada Vancouver Animal Wellness Hospital, has been treating her patients with CBD and has “many more success stories than not.” She uses CBD alone and in combination with other drugs. “For some cases, in the early stages of GI disease (depending on the issue and underlying cause), CBD alone may be effective. More often, it is a great adjunct therapy (along with diet and probiotics) that allows for better management and usually lower dosages of conventional medicine,” Kramer says.

CBD also can lessen diarrhea by regulating the gut’s muscle tone, which controls how fast intestinal contents move through the intestinal tract. CBD and THC can put the brakes on diarrhea. CBD is known to decrease anxiety, in turn decreasing diarrhea.

Cannabinoids are known for their benefits with humans in quelling nausea, and they can work just as well in companion animals, where they’re used most often to combat motion sickness and to decrease nausea from chemotherapy.

“I’ve found CBD to be extremely helpful for relieving pain and nausea associated with cancer and chemotherapy,” Kramer says. CBD’s anti-tumor properties may make it useful in reducing colon cancer, and in fact CBD was shown to reduce the development of precancerous lesions in mice in a 2008 study published in the Journal of Molecular Medicine.

As cannabinoid receptors are widely distributed in the GI tract of all mammals so far studied (including dogs), CBD might just act upon GI issues on your furry family member as it does for you.