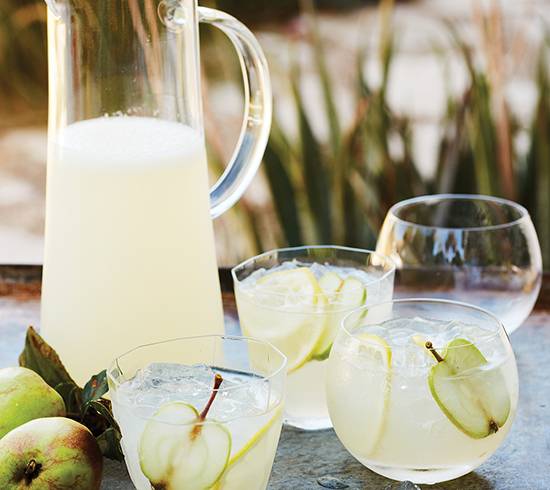 Mixing your own cannabis-infused cider cocktails is one way to embrace autumn, whether you’re quaffing sparkling or still, hard or virgin.

Jeff Danzer (aka JeffThe420Chef), author of “The 420 Gourmet: The Art of Elevated Cannabis Cuisine,” suggests a hot buttered rum drink with apple or pear cider. He uses cannabis-infused simple syrup for most of his cocktail recipes, but prefers infused cannabutter for warm, cider-based beverages. “You just take a pat of cannabutter and put it on top,” he says. “It gives the drink a nice, buttery film on the surface.”

Finishing each drink with butter also allows him to control the dosage—an important consideration when he’s catering parties and private events. Each pat has 5 mg of THC. “If somebody wants less THC, we can always cut that pat any way we need to.”

Although the drink includes rum, Danzer burns off the alcohol before mixing it into the cider. This doesn’t eliminate all of it, he says, but it reduces it to about 8 percent. The process retains the rum flavor while minimizing what he calls “cross-fading,” an uncomfortable feeling that can occur from mixing cannabis with alcohol.

“You don’t want people to be feeling the effects of the alcohol, and then all of a sudden the cannabis kicks in,” he says. “By burning off the alcohol, you get a really nice, warm feeling from the cider that wears off pretty quickly, and there’s a smooth segue to the cannabis.”

To de-alcoholize the rum, he pours it into a pot over a low flame and brings it to a low rolling boil uncovered. About 5 minutes should work.

“You can test it by lighting a long match or stick lighter over the pot, like you’re making a flambe,” he says. “As soon as the fumes stop burning, you know that the rum is ready to use. I always do that when I’m making these for guests because it’s a good show. It’s really fun as long as you’re careful.”

Rabib Rafiq, owner of Bistro 63 at the Monkey Bar in Amherst, Massachusetts, prefers to use dry hard cider in cocktails, because it contributes a fresh apple flavor without the intense sweetness. Rafiq, who created recipes for “The Cannabis Kitchen Cookbook,” by Robyn Griggs Lawrence, reaches for pure alcohol tinctures and infused simple syrup for adding cannabis to cocktails at home.

He keeps recipes simple, adding just a few carefully chosen ingredients. THC-infused elderflower liqueur is one of his favorites. “By itself, elderflower liqueur can be too sweet, but a lot of hard apple cider is already tart, so it only takes a small dose.”

Another promising addition is more often found at the breakfast table than behind the bar. “Someone handed me a can of cider the other day and it was a maple apple cider,” Rafiq says. “It tasted so good, and that immediately got me thinking that my basic THC simple syrup recipe could be used for maple syrup mixed with cider. That would be amazing.”