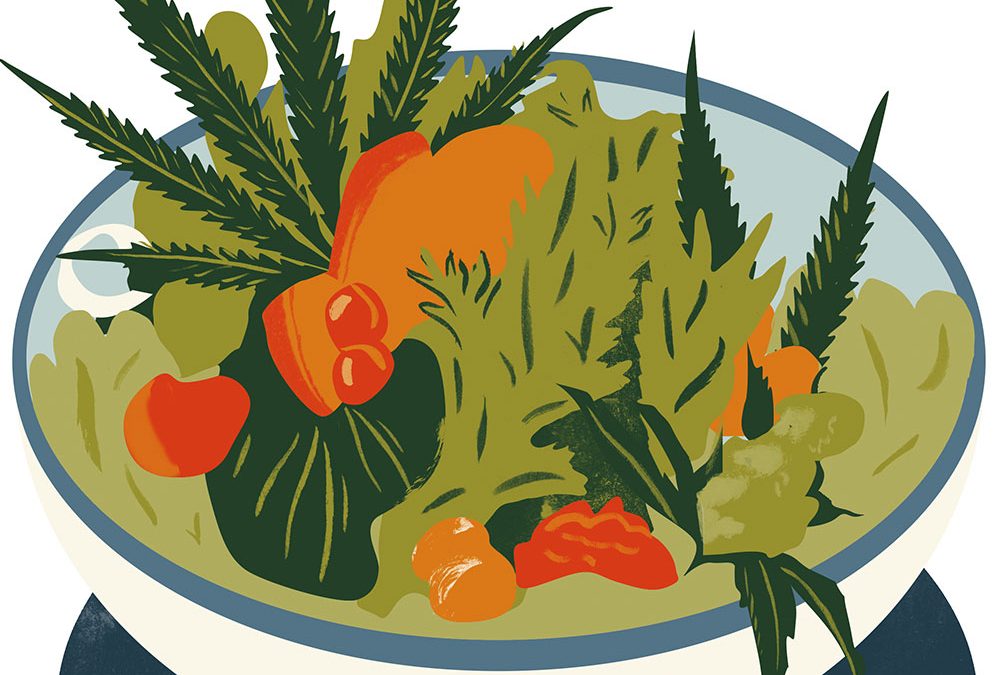 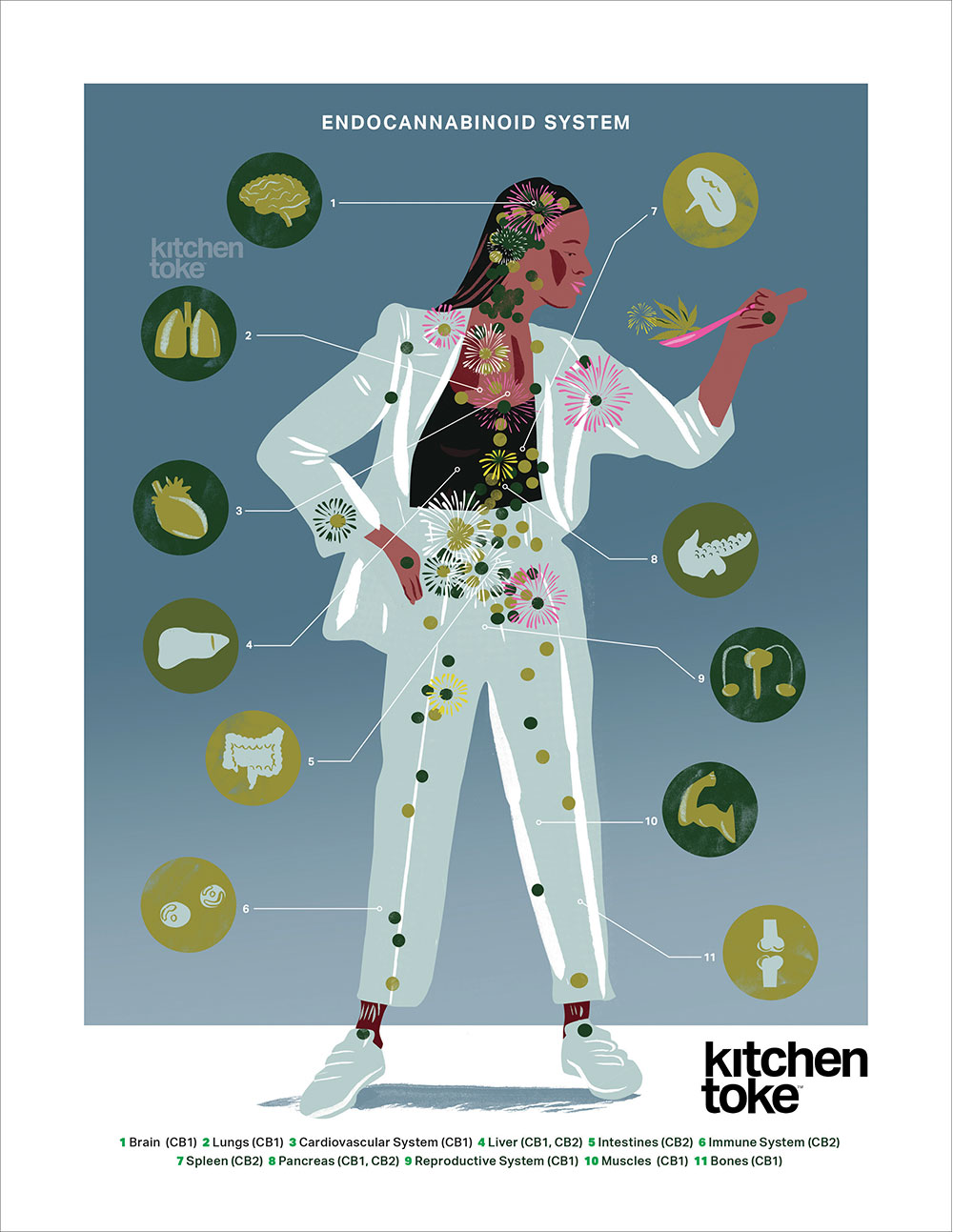 When cannabis is smoked, delta-9-THC enters the blood stream through the lungs and moves to tissues and organs, including your brain, where it connects with the CB1 receptors, says Klumpers. But when we consume delta-9-THC orally, the liver’s cytochrome P450 enzyme, which metabolizes external substances in our bodies, such as medications and toxins, transforms it into a molecule that scientists know very little about: 11-hydroxy-THC.

Eating cannabis engages with our endocannabinoid system differently than when we inhale it. But why?

Imagine standing in front of a locked door with a key in each hand. One key leads to an invigorating hot yoga session. The other opens the same door except you’re in a fist-pumping nightclub at 2 a.m.

“The short answer is, we don’t know,” says Wilson-Poe. “The endocannabinoid system was only discovered in the early 1990s, and we’re still learning what it does in our body and what happens when different cannabinoids and their metabolites bind with its receptors.”

Cannabis is safe in low-potency herbal form, she says, but there’s much more to learn. Here’s where the science stands.

A Tale of Two THCs

Of cannabis’s 100-plus phytocannabinoids, the two most valued aren’t technically produced by the plant, says Linda Klumpers, Ph.D., a clinical cannabinoid pharmacologist at Denver-based Verdient Science.

That “A” for carboxylic acid is important: It makes those two molecules too unruly to bind with our CB1 and CB2 receptors, she says. Subject THCA and CBDA to heat or light and it undergoes decarboxylation, converting the molecules into delta-9-THC and CBD, respectively, each of which is the perfect shape for our CB receptors.

Cannabis’ psychotropic effects are mainly mediated by CB1 receptors, which are primarily found in our central nervous system, says Klumpers. CB2 receptors, on the other hand, are a receptor for cannabinoids mainly expressed in immune tissues where they regulate release of cytokines, signaling proteins that regulate a wide range of biological functions, including innate and acquired immunity and inflammation and repair.

When cannabis is smoked, delta-9-THC enters the blood stream through the lungs and moves to tissues and organs, including your brain, where it connects with the CB1 receptors, says Klumpers. But when we consume delta-9-THC orally, the liver’s cytochrome P450 enzyme, which metabolizes external substances in our bodies, such as medications and toxins, transforms it into a molecule that scientists know very little about: 11-hydroxy-THC.

That 11-hydroxy-THC moves from the liver into the bloodstream and eventually to the brain where its interaction with the CB1 receptors results in highs that are stronger than those caused by delta-9-THC, she says.

While the reason is unknown, it’s not surprising that 11-hydroxy-THC’s effects are different from delta-9-THC, says Wilson-Poe.

“In all classes of drugs, we understand there’s an important relationship between molecular structure and function,” she says. “And in the neurological system, subtle changes in a molecule can have profound effects.”

Consider the opioids codeine and fentanyl. At the molecular level, the difference between the two is subtle, and they both target the same class of receptors in our brains, says Wilson-Poe. But the effects, as the opioid epidemic has proven, are vastly different.

Look to the Liver

Research into 11-hydroxy-THC’s interactions with CB1 receptors is advancing, according to Klumpers. However, to this point, the only clinical study of the molecule was conducted in the early 1970s by Indiana University School of Medicine researchers.

“They gave subjects 11-hydroxy-THC intravenously and found that it caused a different, more intense high than when they were administered delta-9-THC or a placebo,” she says.

Right now, all scientists can really say is that they think 11-hydroxy-THC binds more strongly with CB1 receptors than does delta-9-THC, potentially resulting in a completely different experience, says Klumpers.

When the liver metabolizes delta-9-THC, converting it into 11-hydroxy-THC, it’s breaking down and expelling toxins from our body, in this case THC, explains Minnesota-based clinical cannabis pharmacist Melani Kane, who is also co-founder of the International Society of Cannabis Pharmacists.

That process leaves the liver vulnerable to the toxicity of chemicals we consume—e.g., alcohol and liver disease. But in Kane’s experience prescribing medical THC orally to treat symptoms in post-liver-transplant patients doesn’t appear to be damaging to the liver (aka hepatotoxic).

“I haven’t seen any literature on THC and hepatotoxicity, but in liver-transplant patients it does not interact with the many drugs they’re on to suppress the immune system,” she says.

On the other hand, data shows CBD isolate is hepatotoxic and also interacts with other drugs, says Kane.

UK-based GW Pharmaceuticals in June 2018 earned U.S. Food and Drug Administration approval of its CBD drug Epidiolex to treat childhood epileptic disorders to much fanfare. However, the drug’s clinical trials showed patients developed elevated levels of liver enzymes and some of those patients had to be removed from the study. GW Pharma warns on the bottle that their drug may cause liver damage.

Epidiolex is an isolate—a highly concentrated form of CBD. The cannabinoid’s effect on the liver in low doses is unknown. It’s also unknown whether CBD accompanied by THC or terpenes might provide cellular protection, says Kane.

University of Arkansas School of Medicine researchers recently followed up on GW Pharma’s findings by subjecting mice to dosages of oral CBD calculated from those high doses of Epidiolex given to humans. Their study, published in April 2019 in the journal Molecules found that CBD had a level of liver toxicity and interacted with other drugs.

What you eat with THC also seems to affect how it gets to and interacts with the endocannabinoid system.

Cannabinoids are highly lipophilic and consuming them with a food high in healthy fats seems to provide them with a “lipid raft” to carry them downstream and help them into the blood, says Wilson-Poe.

Patients on the high-fat ketogenic diet have told Wilson-Poe that edibles hit them with greater magnitude and lasted longer than on previous diets.

Researchers are at the early stages of understanding the phenomenon that many edibles consumers know through experience. A study published in the American Journal of Translational Research in August 2016 found that co-administration of cannabinoids with lipids enhances the bioavailability of THC in rats by more than 200 percent, and that of CBD by almost 300 percent.

Fats aside, pharmacist Kane advises her patients not to take oral cannabis with sugar. In her clinical practice, she has observed that when patients transition from sugary edibles to THC pills or oral liquids, they experience significantly different effects.

“When it comes to bioavailability, there’s evidence that if your body is given the choice between sugar and THC, it will take the sugar,” she says.

The unknown is greater than the known.

“We simply don’t know why or how 11-hydroxy-THC interacts with CB1 receptors differently than delta-9-THC does—we still have a lot to learn about delta-9, too,” says Kane. “But, again, we have to remember that cannabis is a Schedule I substance making it hard to study. And the endocannabinoid system is also largely new to science.”

For instance, scientists recently discovered that there are CB1 receptors in the mitochondria in our skin, says Wilson-Poe. “What are they doing there? Nobody knows. But they have to be there to do something—biology tends to put things where they belong.”

Klumpers’ research of THC levels in the blood through inhaled and ingested cannabis adds to the mystery of 11-hydroxy-THC.

“If the effects don’t translate to peak THC in the blood then it is likely that there must be something else about 11-hydroxy-THC that we just don’t understand,” says Klumpers.

Ironically, she says, the cannabinoid we know the least about is the most widely available: CBD. Consumed orally, CBD also enters the bloodstream through the liver, which metabolizes it into 7-hydroxy-CBD, she says.