How to Manage Pain with Cannabis: Insights from a Michelin Star Chef

A Path to Painless

Anna Hamlin is a vegan. At least, that’s when her fiance Iliana Regan isn’t sneaking bacon and butter into her food. She’s equally surreptitious with her mother, who also eschews meat and dairy.

The couple are laughing about this together in their sunny Chicago kitchen on a fall afternoon as Regan tests a recipe, showering vegan cheese over a halved spaghetti squash and effectively hiding crumbled bacon even though everyone is the wiser. The dish also included fresh tomato sauce enriched by cannabutter infused with citrusy Silver Lights #33, a sativa-dominant hybrid strain high in THC that helps alleviate neuropathic pain. Meanwhile, their enormous black-and- white Newfoundland, George, lounges in a corner like a woolly mammoth, waiting for something good to fall to the floor.

Regan is the self-taught chef behind two of Chicago’s most fascinating restaurants: Elizabeth, her prix fixe fine dining fairy tale, and Kitsune, a Japanese izakaya as if supplied from the larder of a Midwestern farm girl. But she also cooks at home for her mother, Sandie Regan, as well as Hamlin, who all share the red brick two-flat in Chicago’s West Ridge neighborhood.

“I’m trying to eat less meat but Iliana finds a way to work it into everything,” says Hamlin.

“You have butter and you have cream in your coffee,” Regan points out. “My mom’s vegan too.” 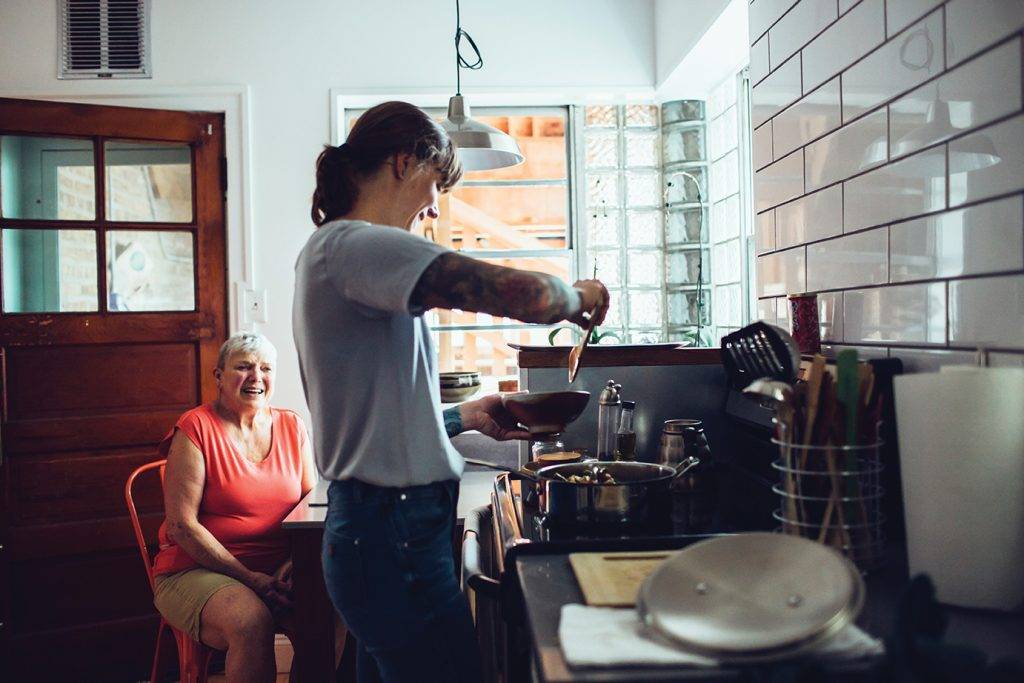 Regan is clearly not a vegan, but she won’t consume certain things— namely alcohol and cannabis. She’s eight years sober, yet this winter she’ll launch a line of edibles starting with a 100 mg THC gummy shaped like an owl—she hopes, anyway. The shape’s playfulness depends on the mood of the regulators that approve such things.

Hoot Infused Edibles will be an ideal trademark for a chef whose style is guided by the aesthetics of forest life.

In her restaurants, Regan’s cooking is known for its whimsy, frequently inspired by fantasy tales and science fiction—executed with modernist technique. But at home she cooks simply, often Italian food—maybe pasta with red sauce, or eggplant Parmesan. “My favorite home- cooked meal would be a chop on the grill, potatoes, and green beans.”

Or maybe something like that spaghetti squash, which Regan agreed to create for Kitchen Toke. She roasts it just long enough for its noodles to curl from the soft yellow flesh at the touch of a fork. She sweats down some garlic and onions in a saucepan, chops a few of the season’s last great tomatoes, and then simmers it all with 4 ounces of melted butter steeped in the de-carbed Silver Lights flower.

When the sauce starts to thicken and take on body, she pours it over the warm squash. Next comes the bacon—a good fistful—a sprinkling of fresh marjoram, and then the vegan cheese, a last resort since there’s no Parmesan in the fridge. On the table, it steams in the sunlight, a rich, comforting lunch for a long and lazy afternoon.

The health of Hamlin, and Regan’s mother, Sandie, plays a lot on her mind these days. The latter suffers from glaucoma, and she’s in remission from amyloidosis, a disease that causes abnormal proteins to build up in her blood. Like a cancer, it’s treated with chemotherapy.

Hamlin has lupus and an acute form of arthritis in her feet, a condition so painful and debilitating she must take leave from her wine distribution job when it flares up. “It feels like your bones are trying to push out of the top of your feet,” she says.

Fortunately, these conditions are covered by Illinois’ Compassionate Use of Medical Cannabis Pilot Program Act, which helps Sandie Regan rest well and recharge her immune system in the days after a monthly chemotherapy shot. Cannabis also eases the pressure on her eyes when her glaucoma acts up, she says. And there’s a bonus palliative effect for an unpleasant fact of life. “I’m 73 years old,” she says. “I’ve got aches and pains.” Cannabis helps her hold down her job four days a week at a local grocer.

As for Hamlin, she was never much of a fan of THC’s high, but she hopes the painkilling and anti-inflammatory powers of cannabidiol, known as CBD, and cannabinol, a metabolite of THC, will help her walk when she receives her own medical cannabis card.

Regan thought a lot about her family’s health when Richard Park, a consultant for Dispensary 33, asked her to create Hoot edibles. They became acquainted when she frequented the coffee shop he once owned.

When Sandie received her medical cannabis license, Regan obtained a caregiver’s license, which allows her to purchase and cook with cannabis for her mother. Her mother’s feedback aided some of the early research and development for Hoot gummies and granola.

“When she first started making it, she was calling it Granny Granola because I was the one that tasted it,” says Sandie.

These days all of Regan’s R&D takes place at Bedford Grow, a cultivation center in a nearby suburb. She works in a kitchen where she precisely calibrates the cannabinoid dosages for the treats she’s developing, “I have to pretty much wear a hazmat suit,” she says. “It looks like ‘Breaking Bad.’”

Regan also plans to bring taffy, hard candies and toffee to the market. For the gummies, she’s experimented with flavors such as elderflower, lemongrass and green apple. A yuzu-flavored gummy will hit dispensary shelves first.

“I studied chemistry for a really long time,” says Regan, who eventually earned a degree in fiction writing before she embarked on the chef life. “Putting chemistry and the food together in that kind of way is just really interesting to me.” She’s also worked with strains such as Purple Haze, Kosher Kush and Pennywise.

“I didn’t go to culinary school,” she says. “So a big part of how I figure out how cooking and food works is to think about what’s happening from a scientific standpoint.”

The goal is to release three precisely formulated categories of Regan’s edibles that concentrate on THC, CBN or CBD so patients can target their particular symptoms, Park says.

Regan’s making sure things taste good and are good for you, too. Her granola contains ingredients such as bee pollen, organic oats, goji berries, flaxseed and raw honey. “I’m trying to incorporate superfoods,” she says. “If people are eating these with the illnesses they have, they should probably be staying away from high sugar levels.”

“I love the granola,” says Sandie. “You can see the nut and oats and whole grain. It isn’t overly sweet.” (The gummies, on the other hand, were a bit too sweet for her.)

If all goes according to plan, Hoot Edibles will be available in other states where it’s legal to purchase edibles.

Though Regan won’t ever eat her own cannabis-infused edibles, she’s fulfilled knowing that she’s created a product for the people she loves and others with debilitating conditions.

“It’s very gratifying,” she says. “Not only being able to help people, but it satisfies my love of chemistry and cooking together. I’m kind of getting everything all in one.”