What is the Endocannabinoid System?

For starters, it’s a bridge between body and brain

Did you know that the National Institutes of Health (NIH) considers the endocannabinoid system (ECS) to be “one of the most important physiologic systems involved in establishing and maintaining human health”?

Raphael Mechoulam, whose discovery of THC predated that of the ECS’ by nearly 25 years, seems to agree. In a 2017 interview with this writer, he cited an NIH report noting that “the endocannabinoid system is involved in essentially all human diseases. So obviously it is of extreme importance.”

Mary Lynn Mathre, R.N., M.S.N., is the president and co-founder of Patients Out of Time, which is celebrating 25 years of educating professionals and consumers about cannabis and the ECS. She describes the system’s importance this way: “Endocannabinoids and their receptors are located throughout the body, performing different tasks but with the common goal of balance and homeostasis. Think of the ECS as the maintenance system of your body, whose mission is to keep everything running smoothly while you are continually assaulted by the external environment. With its complex and constant interactions with all the other systems of the body, the ECS can be viewed as a bridge between body and mind.” 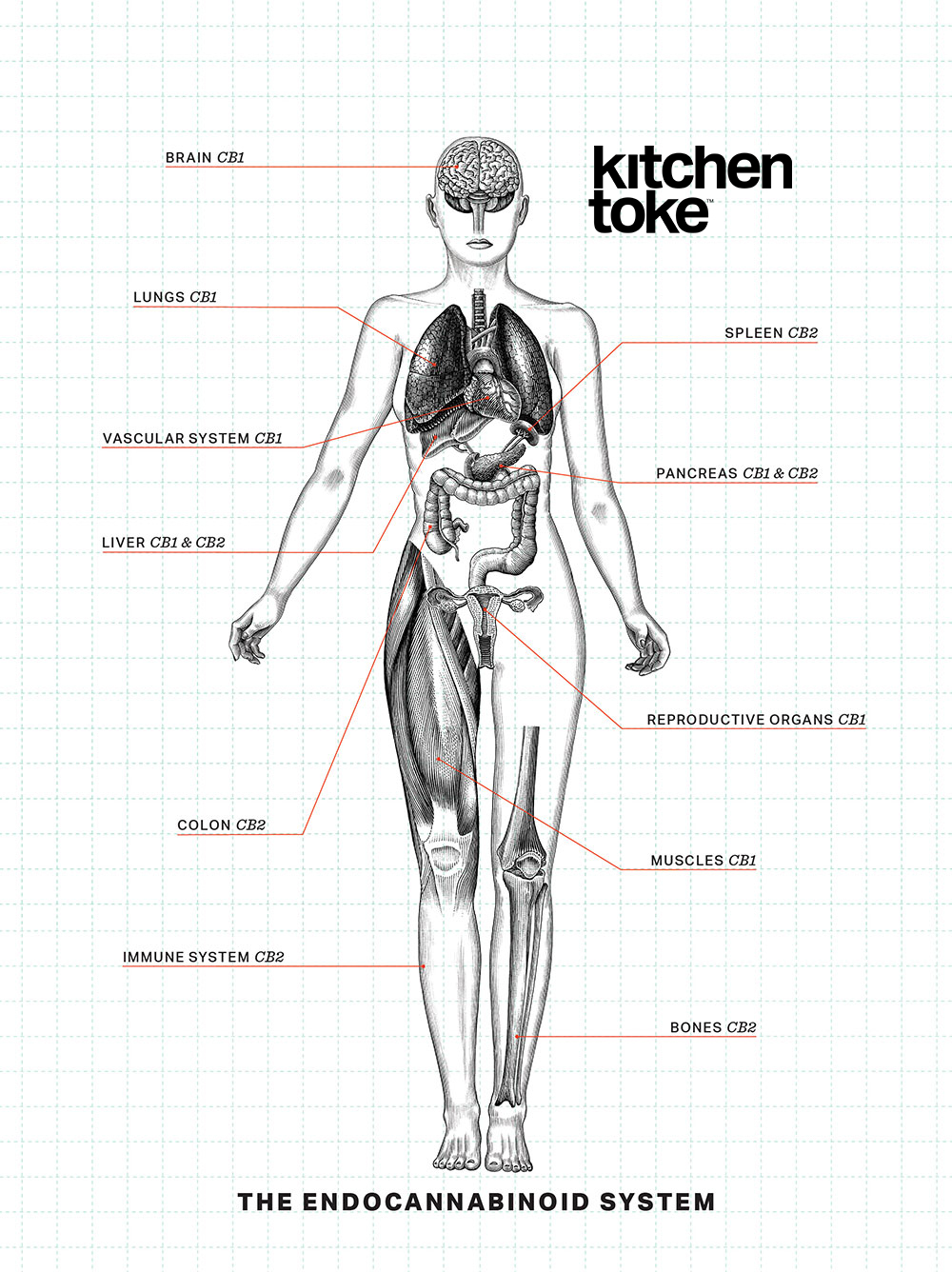 Named for the plant that led to its discovery, the endocannabinoid system features receptors and compounds that operate as a lock-and-key system. Its endogenous receptors (located within the body) are cell membrane proteins, which function as the locks; the receptors discovered so far are called CB1 and CB2. The keys to these locks are the endocannabinoids that our bodies produce. Derived from fatlike substances, the primary endocannabinoids are anandamide, an analog of THC named for the Sanskrit term for “bliss,” and 2-arachidonoylglycerol (2-AG), an analog of CBD. Unlike many other biological molecules that are stored for later use, endocannabinoids are produced as the body needs them (like during a bout of inflammation).

…the endocannabinoid system is involved in essentially all human diseases. So obviously it is of extreme importance.

Cannabis is processed differently by the body than drugs such as opioids and alcohol. Just as we have endogenous cannabinoid receptors, we have endogenous opioid receptors. In cases of opioid overdoses and subsequent death, opioids depress the parts of the brain stem responsible for breathing and blood circulation. With alcohol overdose, the liver becomes overwhelmed, and the alcohol that the body cannot detoxify negatively impacts the same areas of the brain stem that regulate breathing and circulation. Because the brain stem has an insignificant number of endocannabinoid receptors, the parts of the brain that regulate breathing, blood pressure and heart rate—and, ultimately, life or death—are not negatively impacted by any level of cannabis consumption. 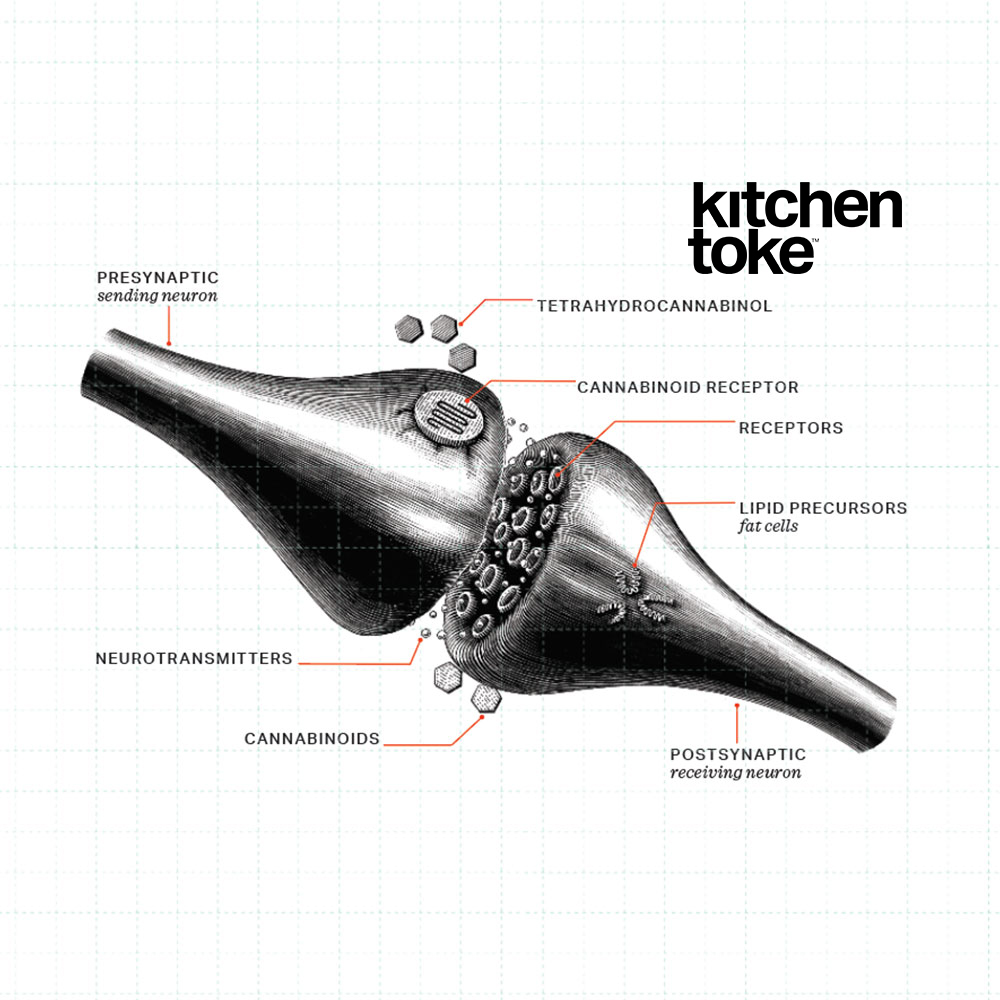 Researchers estimate that the endocannabinoid system evolved over 600 million years ago, but the first cannabinoid receptors (CB1) weren’t discovered until 1988 by Allyn Howlett and William Devane at the St. Louis University School of Medicine. Several years later, the first endogenous cannabinoid was discovered in Israel, so by the mid-1990s scientists understood the basics of the ECS.

Based on research into three treatment-resistant pain syndromes—migraine, fibromyalgia and irritable bowel syndrome (IBS)—Ethan Russo, M.D., founder and CEO of CannabisResearch.org, has proposed theories of endocannabinoid tone and clinical endocannabinoid deficiency that are now widely accepted in the medical cannabis community. According to Russo, “The hypothesis is that all humans have an underlying endocannabinoid tone that is a reflection of the levels of anandamide and 2-arachidonoylglycerol, their production, metabolism, and the relative abundance and state of cannabinoid receptors. The theory is that in certain conditions, whether congenital or acquired, endocannabinoid tone becomes deficient and productive of a path of physiological syndrome of one kind or another.”

Further research revealed that migraine, fibromyalgia and IBS tend to be comorbid, meaning that they often occur in the same individual, supporting a biochemical basis to these conditions, possibly due to clinical endocannabinoid deficiency.

In a seminal paper, Vincenzo Di Marzo, Ph.D., of the Institute of Biomolecular Chemistry in Italy, summed up the five primary functions of interaction between phytocannabinoids and the ECS:

Why You Should Take a Vacation From Cannabis

Research has shown that the ECS appears to operate best with small amounts of cannabinoids, which signal the body to make more endocannabinoids and build more cannabinoid receptors. Think of the old adage “less is more”; smaller doses have bigger effects. When individuals consume more than their bodies need, the receptors can literally shut down. The solution to this is rather simple: Take a cannabis holiday to enable your system to recalibrate and your receptors to accept smaller doses. Small regular doses of cannabis may be just what the doctor ordered. It’s not about getting high. It’s about getting healthy.

We may never know why the ECS remained an unsung hero for so long. What we do know is that it’s high time the endocannabinoid system became a focus of study. Just as the ECS is a central component of health and healing, understanding this system is foundational to understanding the cannabis plant and its role in holistic wellness.