What seniors need to know about medical cannabis 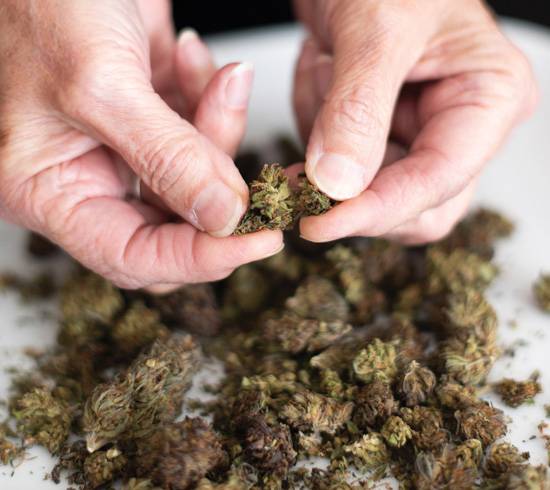 Does Granny Need a Shove?

Wouldn’t it be the ultimate if you could infuse cannabis into your weed-reluctant grandmother’s, great uncle’s or older parents’ next meal, and then learn that their everyday aches and pains had disappeared?

Baby Boomers make up the fastest growing demographic of cannabis users, according to a report by the Society for the Study of Addiction. A new wave of legal cannabis has made the herb more accessible, giving older Americans access to edibles, tinctures and topicals to manage arthritis, insomnia and a host of other common aging-related ailments and illnesses.

“Low-dose edibles are very attractive to the senior community. It’s much easier to understand when and how to take it,” says Barbara Blaser, 72, a retired nurse from Oakland, California, who uses cannabis for anxiety, insomnia, chronic pain and post-traumatic stress disorder. “Smoking cannabis isn’t an option for everyone, including me, which is why I prefer edibles.”

Yet older Americans are more likely to be discouraged from exploring whether the plant can help them equally or better than pharmaceuticals. Doctors often steer the aging away from cannabis, according to Beverly Potter, Ph.D., and author of the book “Cannabis for Seniors.”

Because the federal government classifies cannabis as a Schedule I drug, the same category as heroin, fear and stigma surrounding cannabis prevail for the older set. Government-backed research remains largely unfunded, and those in retirement communities, assisted living facilities and nursing homes who receive funding through Medicare and Medicaid will, for the most part, not be allowed to use weed—even in states where it’s legal.

The hurdles are less prevalent where cannabis has been recreationally legal longer, such as Washington and Oregon. At the beginning of 2017, at least 12 assisted living facilities in Washington had established medical cannabis policies, according to the Washington Health Care Association.

WHCA offers an online medical cannabis policy template for assisted living facilities to adopt or model their own protocols. But that doesn’t mean medical professionals can dispense cannabis. “This is very important with medical cannabis,” says Robin Dale, WHCA’s executive director. “Our proposed policy clearly outlines that it is the resident’s responsibility to purchase, administer, and store the cannabis.”

The Anderson Community in Seattle, a senior living complex that offers independent living care for Alzheimer’s patients, allows medical edibles. They don’t have a dispensary on site, but with plenty nearby, access is easy.

Only residents with a prescription are allowed edibles and must keep them locked in their rooms, says community relations director Karen Roehl. But for patients whose doctor has ordered cannabis, the staff monitors them and it’s a part of their care plans.

Laguna Woods Village, an assisted living facility in Orange County, California, has a collective for the residents called Laguna Woods For Medical Cannabis that provides education about the plant and information on medicating responsibly.

“I know of at least six people who haven’t refilled their opioid (prescription) or they’ve been able to reduce pain, depression and other ailments they have prescriptions for by using cannabis and edibles,” says Sheri Horne, a resident who, along with her husband, uses high CBD and 3:1 THC to CBD tinctures daily to manage arthritis pain, increase appetite, lower anxiety, and get better sleep.

With the dearth in research, lack of formal education and training to dispense cannabis and the plant’s federal standing, it makes sense doctors don’t recommend it.  Though not all doctors are closed-off to cannabis, it takes convincing.

Ronnie Bennett, a Portland, Oregon, resident, had problems sleeping after a four-month recovery from a pancreatic cancer-related operation. Over-the-counter medications and prescriptions did not help. Eventually, Bennett’s doctor told her to try cannabis.

“This happened because I live in a state where medical and recreational are legal,” Bennett says. “I use several drops of a 9:1 THC to CBD tincture every night and I’m out in 45 minutes for as much as seven hours, and there’s never a hangover.”

Dr. Ran Abuhasira, a researcher from Be’er-Sheva, Israel, conducted a study in March 2018 investigating cannabis use among seniors. The report found that the therapeutic use of cannabis is safe and effective. Despite these findings he remains cautious.

“We believe that cannabis might be able to replace mainly analgesics, and perhaps sleep medications too,” Abuhasira says. “The data from our research show that cannabis use can decrease prescribed opioids, but there are also contradicting studies, and the last word has not been spoken. We are still collecting data.”

Dr. Daniele Piomelli, a renowned cannabinoid researcher and neuroscientist from University of California Irvine, also leans toward caution, but admits the side effects from cannabis are far less severe than opioids. “The consequences of abuse are a lot less dire, making cannabis a safer option, although we can’t say if it’s an opioid-sparing drug.”

Experts recommend researching local dispensaries and checking out the ones with the highest reviews. A medical card is not required in fully legalized states but allows for purchasing higher dosed cannabis, which is often needed for more severe conditions. Once you have it, establish a rapport with a budtender (weed expert) and openly discuss your needs (see sidebar, above).

Although cannabis works for many people, it’s not for everyone. Advocates and skeptics agree that more research is needed to determine why.

It Worked for Me

“It’s powerful,” she says. “It’s ideal for curbing my pain, and it helps so much after a long day at work.”

“I’m not much of a cook, but my friends do, so I get edibles that way too,” he says. “It helps my appetite and my anxiety.”

“The tincture is going to hit me almost instantly and last for two hours, which will help me go to bed,” she says. “As it fades away, my blueberry is going to kick in, and I’m going to get seven to nine hours’ worth of rest.”

Deciding whether cannabis is a viable option can be a complex process and you should always keep your doctor informed. Some points to consider: